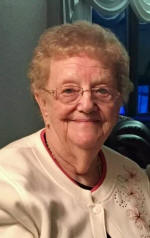 Marie Noteboom, 99, died at Good Samaritan Society in Corsica on Thursday, October 8, 2020. There will be a private family ceremony.

Marie Marjorie Noteboom was born on March 17, 1921 in Douglas County, SD to John and Jennie (De Vries) Bobeldyk. She attended school in rural Douglas County. On November 23, 1938 she married Martin W. Noteboom. To this union, three sons were born: Roger, Robert, and Larry.