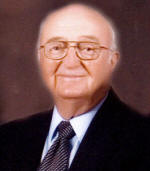 Walter Eugene Niewenhuis was born on June 23, 1926 to John William and Anna (Spoelstra) Niewenhuis in rural Corsica, Douglas County, SD. He attended Garden Valley Christian School and Garden Valley Public School in Douglas County. He was drafted at the age of 17 and beginning on April 19, 1945, served in the US Army during World War II overseas on the island of Okinawa. This is when he discovered his passion for flying. Upon returning home after his honorable discharge on December 20, 1946, he was able to experience it for himself by learning to fly through the GI Bill.

Gene was united in marriage to Evelyn Vander Tuin on December 28, 1950 at the Christian Reformed Church in New Holland, SD. He made a career as a lifelong dairy farmer and general crop farmer, working the land of the Niewenhuis family farm in Holland Township until retiring and moving into New Holland. He enjoyed discovering new places through travel, the freedom of flying, being out in nature hunting and the joy of reading a good book. A member of the New Holland Christian Reformed Church, he served as an Elder and was on the Christian School Board. He was Sexton of the New Holland Cemetery for 20 years. Gene was an active member of The Gideons International, Everson-Beukelman American Legion Post #274 and the American Farm Bureau Federation. Gene’s relationship with his Lord and Savior was a strong and personal one. His daily, beautiful conversations, through prayer, were evident to his final day. Watching him on the farm, at church and in the community, he taught his family the value of hard work. He was able to find balance and knew the importance of a family vacation. Grateful for having shared in Gene’s life: his wife of nearly 70 years, Evelyn Niewenhuis of New Holland, SD; five children: Wilmer (Joan) Niewenhuis of Platte, SD, Randall (Diane) Niewenhuis of Corsica, SD, Daniel (Jody) Niewenhuis of Corsica, SD, Wendell (Robin) Niewenhuis of Aberdeen, SD and Jo Ellen (Douglas) Dykstra of Platte, SD; 34 grandchildren; 69 dear great-grandchildren; a brother, George Niewenhuis of Corsica, SD; a sister, Glennys Feenstra of Corsica, SD; along with many nieces and nephews. Gene was preceded in death by: a daughter and son-in-law, Marcia Faye and David Kuipers; a daughter-in-law, Maureen Niewenhuis; a granddaughter, Marlee Niewenhuis; his parents, William and Anna Niewenhuis; a sister and her husband, Evelyn and Howard VanderVeen; a sister-in-law, Violet Niewenhuis; and a brother-in-law, John Feenstra. Memorials in Gene’s honor may be directed to: The Gideons International Processing Center, PO Box 97251, Washington, DC 20090-7251 or Dakota Christian School, 37614 SD Hwy 44, Corsica, SD 57328.