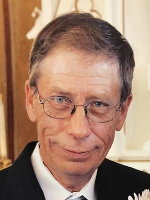 Ronald E. Grosz was born on December 6, 1954 in Parkston, SD to Ervin and Regina (Blume) Grosz. He was confirmed at St. Peter Lutheran Church near Armour in 1969. He graduated from Armour High School in 1973. After high school, the attended Mitchell Technical College and graduated with a power lineman degree. He moved to Dodge City, KS where is worked as a power lineman until moving back to take over the family farm near Armour from his father where he milked cows. On September 25, 1976, he married Dedra Minahan at St. Mark's Catholic Church in Lake Andes, SD. When Ron's farming career ended, he worked for construction for excavator companies and for the City of Corsica doing maintenance. Dedra died on April 16, 2014. Ron was a member of St. Peter Lutheran Church near Armour. He enjoyed shooting pool, camping, 4-wheeling in the Big Horn Mountains in Wyoming, and woodworking. Ron died at Sanford Hospital in Sioux Falls, SD on Wednesday, October 13, 2021 at the age of 66.

He was preceded in death by his parents, wife, Dedra, and sister, Doris (Stanley) Storm.