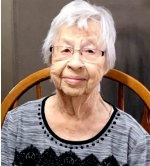 ﻿Tena Van Zee, 95, of New Holland, SD passed away Saturday, November 13, 2021 at the Good Samaritan Society – Corsica, SD. Funeral Services are 10:30 AM Friday, November 19, 2021 at the Harrison Community Church - North, Harrison. A Committal Service will follow at Harrison Cemetery. Visitation will be held at the church from 9:30 – 10:30 AM prior to services on Friday. Memorials in Tena’s honor may be directed to: Harrison Community Church, 390 5th St., Harrison, SD 57344. Mount Funeral Home of Platte, SD is assisting with arrangements. Expressions of sympathy may be extended to the family through mountfuneralhome.com.

Tena (Sheepstra) Van Zee was born on March 12, 1926 to Klaas and Nelly (DeJong) Sheepstra on the family farm eight miles north of Worthington, MN. She graduated from Worthington High School in 1943. Tena began summer school sessions in Minnesota and later in South Dakota, before she started her teaching career in South Dakota. In 1975, she received her Bachelor of Science degree from the University of South Dakota in Springfield, SD.

Tena retired from teaching after 37 years, 23 of those teaching third and fourth grade at the New Holland Christian School. She enjoyed teaching Sunday School, catechism, and Vacation Bible School. She also wrote letters to prisoners every week for 15 years.

Her retirement years were spent enjoying her grandchildren and great-grandchildren, substitute teaching, playing Scrabble, and having coffee or tea with neighbors and friends. She especially appreciated Melvin and Geneva Overweg, who were always there for her and Dale.

She was preceded in death by her husband, Dale (2015); her parents; her sister, Sena Hunsucker; her brothers: Clarence and Daniel Sheepstra; brothers-in-law: Clarence Hunsucker and Orin Van Zee; and sisters-in-law: Evelyn Sheepstra, Esther Sheepstra and Frances Van Zee.