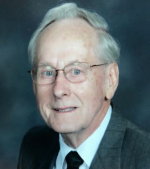 A Memorial Service will be held at Platte Christian Reformed Church, Platte, South Dakota on Saturday, February 12, 2022 at 2:00 PM. Visitation will be held from 12:00 - 2:00 PM at the church. Reverend Van Essen will be laid to rest at Platte City Cemetery, Platte, South Dakota. Family and friends are invited to the service or to view the service via live streaming. Expressions of sympathy may be extended to the family through www.mountfuneralhome.com. The service will be live-streamed under "Photos and Videos" on the funeral home website (Webcasting), through “Mount Funeral Homes” Facebook page and at www.plattecrc.org.

Clarence was born to Jacob and Clara (Bolt) Van Essen on September 30, 1927 and is survived by brothers: Henry (Dot) and Wesley (Jean) and sister, Joyce Bruxvoort. He was preceded in death by sister, Ella (late Jack) Kooiman, brothers: Henry, Raymond (late Lena), and Nelvin (late Jennie) and brother-in-law, Marvin Bruxvoort.

Clarence attended Edgerton Christian Grade School and one year of high school. He then worked on the family farm until he was 18. Clarence was drafted after WWII and made Profession of Faith before reporting to Fort McClellen in 1946 for basic training.  After basic training, Clarence was sent to Japan where he served as a telephone installer repairman for 9 months.  After being discharged from the Armed Services on April 6, 1947, Clarence returned to his family farm. Shortly thereafter he became very ill with pleurisy and spent 7 months on bed rest.

During this time, Clarence heard God’s call to enter the ministry. He took a college entrance exam, passed and enrolled in a Pre-Seminary course at Calvin College. It was shortly before entering college that Clarence began dating Henrietta Vanden Bosch. They were married on June 29, 1951 and enjoyed 70 years of marriage. After graduating from Calvin College, Clarence entered Calvin Seminary where he completed his education for ministry in the Christian Reformed Church.

During working and retirement years, Clarence and Hennie served on many boards and for various ministry organizations: Dordt College Board, Christian Reformed World Missions Board, Classical Home Missions, Marriage Encounter and several others. He also led numerous men’s and women’s Bible studies, took many young people to Young Calvinist Conventions, and organized youth Bible Camps. Clarence also spent many Sundays during retirement preaching in various churches and together with Hennie served in short-term and long-term fulfillment of church vacancies.

Clarence was a loving man who enjoyed people of all ages. He truly loved his family and spending time with them. Laughter and joy was a part of each day and he enjoyed playing “Rook” and sharing a bowl of popcorn with family and friends. He loved “making a joyful noise” in praise to his Heavenly Father. More than anything, Clarence daily modeled his faith to everyone he met, knowing and believing that his only comfort in life and in death was that he belonged, body and soul, to his faithful Savior, Jesus Christ.

Werner-Harmsen (Waupun) and Mount (Platte) Funeral Homes have been entrusted with Clarence’s care.