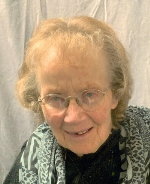 ﻿Doris Markus, 89 of Corsica/Harrison, SD died Friday, April 1, 2022 at the Pioneer Memorial Nursing Home, Viborg, SD.  Funeral services will be at 2:00pm Friday, April 8, 2022 at the Harrison Community Church in Harrison with burial after the service in the Harrison Cemetery.  Visitation will begin at 1:00pm at the church.  Arrangements by Hofmeister Jones Funeral Home, Parker.

In lieu of flowers, the family asks donations be directed to the Harrison Community Church building fund, Harrison Cemetery Fund or Gideon’s International.

Doris Mae Noteboom was born on January 19, 1933 near Harrison, SD to Gerrit and Cora (Streelman) Noteboom.  She grew up in the Harrison area where she attended country school and graduated from Corsica High School in 1951.  After receiving her teaching certificate from Southern State Teachers College in Springfield, SD she taught country school, at the Corsica Christian School and was a substitute teacher.  On Christmas Day, December 25, 1951 she was united to Dennis Markus at Harrison.  They raised their children on a farm near Harrison where she helped out with many farm related activities.  They moved into Corsica in 1993. They enjoyed retirement which included travel, gardening, and golfing. In 2017, she became a resident of the Leisure Living Corsica.  She was a very active member of the Harrison Reformed Church.