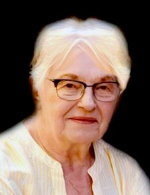 Joan Christina (Dyk) Mulder was born on November 12, 1943 to Joe and Anna (Visscher) Dyk in Platte, SD. She attended Platte Christian Grade School and graduated from Platte High School in 1961. Joan was united in marriage to Arnold Edwin Mulder at the Platte Christian Reformed Church on November 14, 1961.

She was a member of the New Holland Christian Reformed Church and served as the New Holland, SD Postmaster until retiring from the post office. Joan enjoyed traveling, was an excellent cook known for her delicious cookies and loved to share her quilting and crocheting talent in blankets for the family. Joan kept busy volunteering wherever needed, visiting with friends over coffee and getting together for a game of cards.

Joan was preceded in death by her husband, Arnie Mulder (Apr. 1, 2015); her parents, Joe and Anna Dyk; a sister, Christina Dyk; a brother, Clyde Dyk; parents-in-law, Ed and Minnie Mulder; and a sister-in-law, Helen De Vries.